Scottish Sports Aid congratulate James Clegg, the 18 year old paralympic swimmer from Langholm, who was presented with the award of the Junior Sportsperson of the Year at the Commonwealth Games Dinner held in Glasgow on Saturday 10 November 2012. James had a great season, setting numerous personal best and British record times in the pool. The season came to a great climax when he won a bronze medal in the S12 100 metre butterfly event at the London 2012 Paralympic Games. James also qualified for the Paralympic finals in the 50 metre and 100 metre freestyle events, where he finished in 6th and 8th places. 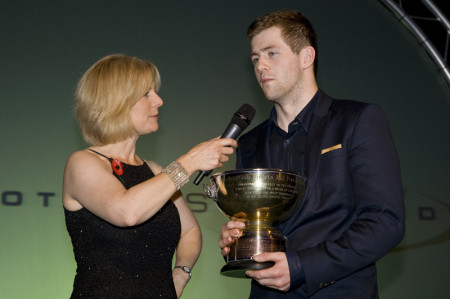 Maia Lumsden, the 14 year old tennis player from Bearsden, was also honoured by being presented with the Miquel Trophy, presented to the person selected as the most improved young sportsperson of 2012. Maia was the winner of a Tennis Europe grade 1 event in January, and being part of the GB Under 14 team who won the European Championships, and were runners-up in the World Championships. As a result of her fantastic performances throughout the season, she reached the No. 1 World Ranking in her age-group.

James and Maia were chosen from the following five sports stars who were selected as the Scottish Sports Aid Merit Award Winners for 2012, due to their outstanding results during the year. The Merit Award winners were:- 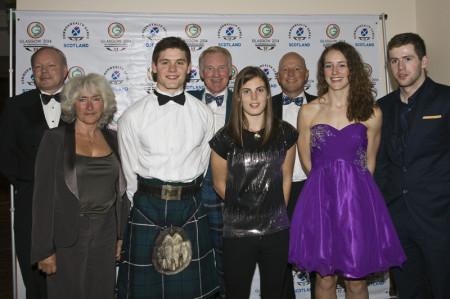 The Merit Award Winners, together with some of the Scottish Sports Aid Trustees and staff

At the 2012 Olympic Games, Team GB comprised over 500 athletes, of which 55 were Scots. Of these 55 Scots, there were 38 athletes competing in ‘individual’ sports, and of those 38, 17 had received grants through Scottish Sports Aid in their earlier years, to assist them with their costs of training, travelling and competing in events, both in Scotland and abroad. These 17 former recipients of Scottish Sports Aid grants included London 2012 double gold medallist Sir Chris Hoy, fellow gold medallists Katherine Grainger (rowing) and Tim Baillie (slalom canoe), and silver medallists David Florence (slalom canoe), Luke Patience (sailing) and Michael Jamieson (swimming).

Scottish Sports Aid would like to congratulate all the above medal winners, along with the remaining Scots in Team GB, who, through their dedication, determination and talent, have given so much pride and inspiration to the whole of the Scottish nation. Scottish Sports Aid and its generous sponsors and supporters are all thrilled to have been able to make a contribution towards the success of these world-class athletes.

Our Chairman, Ronnie Sloan, on Sunday 17 June completed The Seven Hills of Edinburgh Challenge, which comprises Edinburgh Castle, Corstorphine, Craiglockhart, Braid, Blackford, Arthur's Seat and Calton Hills, a total of 15.5 miles and 2,200 ft of climb, in 3 hrs 26 mins.  In appalling weather conditions, he ran in his old marathon garb of a tartan Superman outfit, and at 69 won the oldest competitor prize. You can still sponsor him at www.justgiving.com/ronniesloan

Craig Benson, the 17 year old breaststroke swimmer from Livingston, who has recently qualified to compete in the London Olympics, received the prestigious award of the Best Up and Coming Sportsperson at the Scottish Variety Awards, sponsored by the radio station Clyde 1, and held at the Crowne Plaza Hotel on Saturday 24 March 2012. Craig is currently in receipt of a Bank of Scotland Local Heroes Award through Scottish Sports Aid.

The other nominees in this category were hammer thrower Kimberley Reed, sprint kayaker Sean Redmond and triathlete Grant Sheldon, who are all also currently sponsored through Scottish Sports Aid.

Craig Benson of Warrender Baths, Edinburgh, who is a current recipient of a Bank of Scotland Local Heroes Award through Scottish Sports Aid, has continued his brilliant form of 2011 by smashing his own Personal Best in 60.47 seconds to finish second in the Men’s 100m Breaststroke final at the recent British Olympic Trials, which has qualified him for the British Olympic team competing at the London Olympic Games this summer. For 17-year old Craig, this is his biggest success to date, and follows on from his three Gold Medals for Scotland at last year's Commonwealth Youth Games. 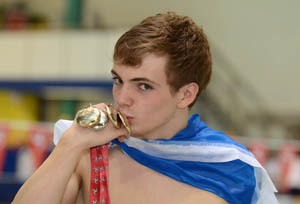 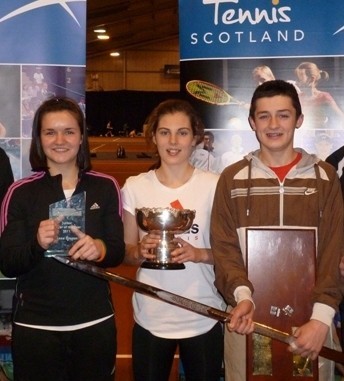